I am a dirty, filthy pig.

If you came over to my house last night for our annual Christmas Vacation party (and braved the weather, because we ALWAYS seem to pick terrible weather days for our annual extravaganza) I hope what you saw was a clean house.

It wasn't necessarily that way until, oh say, an hour before you showed up.

Ok, so there was a lot of the house WAS clean before the moments before you showed up. When we moved in (Halloween weekend), I scrubbed and bleached countertops, sanitized every cupboard in the kitchen before any dish went in, and requested that Eric clean the carpet in the master bathroom. Since then, I have dusted on a regular basis, continually washed countertops in the kitchen, and vacuumed on a regular basis, including the bathrooms because, yea, we do that now. Vacuum bathroom carpet.

If I'm being most honest, I will tell you that this house is 4,000 square feet plus (I don't actually know the exact square footage) which is about 2,000 square feet more than we actually need (ok, 2,050, I need 50 square feet of storage space. I like my stuff, even if I only use it seasonally.) As a consequence, the two side-by-side bathrooms in the basement didn't get cleaned until we had been in the house for three weeks. Now, we haven't ever USED them, but still, we let the ghosts of someone else's butt haunt those toilet seats for weeks after we moved in.

If I'm further honest, I will tell you that the basement kitchenette countertop and sink also waited three weeks for a cleaning.

Taking it one step further, I will tell you that because I don't have anything in the basement bathroom or kitchenette cabinets, I did not clean them. And probably won't. There could be Ebola living in those cabinets and I haven't taken so much as a Lysol can to them (again. Not getting Ebola.) I'm not sure I've even opened them.

The carpet in the basement, which I rarely go into, didn't get vacuumed until Eric did it Saturday morning in anticipation of children playing down there during the Vacation party.

The grossest thing however?

I know, dirty filthy pig! With the move out, the move in, keeping "show ready," and basically having better things to do, I have lost my OCD edge!

It may only be a matter of time until we're Cousins Eddie and Catherine... it's starting already! 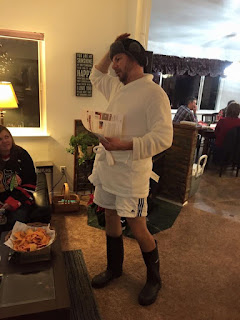