Look! A race report! The first since the New York City Marathon in 2019, because, you know, #2020. I actually participated in the Climb4Change Power Hour a couple weeks ago at the Challenge Hill in Castle Rock, but this is the first distance race I've been in since I ran the five boroughs. 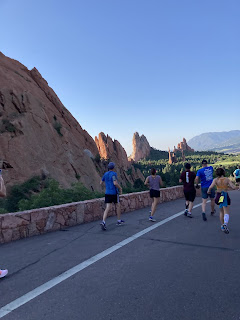 I was up super early this morning, after a night of tossing around. We had some friends over for dinner the night before, and I should have probably avoided eating about half the stuff I ate, as my stomach was giving me issues. Also, our normally dry Colorado weather took a turn and the humidity present overnight felt like we had somehow been transported to the beach. Knowing the day was going to be warm, I slathered on the sunscreen and the Body Glide, filled up my water bottles, and was on the road by about 5:30. I parked at the elementary school outside the park, stretched, and gave myself a one-mile warmup, ending the near the start line. I made sure to get some extra water as it was already warm and the humidity was still pretty high - which is nearly unheard of here. I was glad I was in a tank top and light colored half-tights.

I tend to go out too fast in races, so I made an intentional effort not to blow my chances of a good run by sprinting off the start. The first mile ended up being the slowest of my whole race, so maybe I didn't need to compensate quite so much. However, it was still faster than the guy I passed at the very beginning, who turned to his friend and exclaimed "This race is twice as far as I've ever run!"

The course takes you around and through Garden of the Gods, doubling on itself in several places to get 10 miles in through the roads and paved paths of the park. You traverse by all the major rock formations, including a loop around Balanced Rock and twice through the most popular area of rock formations near Kissing Camels. The course constantly rolls with steady uphills and down. Training for the Pikes Peak Marathon meant that I had already been doing time on hills. I had an advantage in that we live at 7600 feet of elevation, and I've been running up to nearly 11,000 feet so far. The Garden ranges between 6200 and 6500 of elevation, making the course lower than what I'm used to, and I passed a lot of people on the uphills. 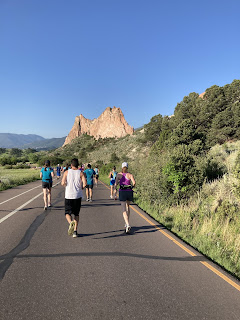 After the first mile, I eased into a faster pace, and worked steadily through the hills. I kept expecting my quads to start burning at some point, but it never happened. Yay, training! What did burn was my stomach, and on and off through the race I debated if I needed to pull over for an emergency stop. Someone remind me, no brie before racing.

Coming around after the four mile mark, you can see the course return, and what looked like a big, long steep hill with a relatively drastic grade  around the six mile mark. I wondered about it, and made note that it could give me some trouble. I made intentional efforts to watch my form while I was running, keeping upright with shoulders back so I opened my chest as much as possible to get air in, and so I wouldn't put pressure on my low back by slouching. I also made sure to keep my feet up and not shuffling. I felt like I had constant reminders of both during the race, as a lot of runners were really hunched over on the uphills, and the quietness of the park with few spectators (the route is closed) meant you could hear the footfalls of others.

Mile 4 or so was also where we saw the first women race leaders. We had seen the men on the double-back earlier on, but around here was where we saw the lead women. There's something about women supporting women that is so cool - I happened to be right by several other women when we saw the leaders, and simultaneously, we all noted they were the female leads and broke into cheering for each we passed.

We were cruising along the road with a pretty overlook, when behind me, I heard one guy asking about the course. "Umm, so are there more hills?" <<yes>> Man makes a troubled, 'oh' sound. "I'm from East Iowa, our courses aren't like this..." Not sure where this guy thought he was or what he thought he signed up for, but the home page of the race literally says "Big hills, Awesome rocks, All challenge!"

I wove through the park, around the Balanced Rock loop, and back. I waited for the hill trouble I was expecting, but my view point must have been skewed because while there was a long, steady hill around mile 6, it wasn't as bad as what I thought I saw. A lot of people who would walk the uphills, then catch up with me on the downhill, only to get left behind again. I passed the same people multiple times before eventually losing them all around mile 8.

When I crossed the 8 mile mark, I knew I could make it to the end without having to stop for a toilet. Someone also called out "little bit of up, lots of down from here" and that was exceedingly helpful. We trotted through the rock formations and then back out on the road in reverse, passing the backside overlook and then a long, steady downhill to reverse the start. Mile 9 was just before the turn to take the Gateway Road out of the park. Heading out, with the formations behind me, this woman who had been walk-running and switching positions with me for the last several miles was right on my tail. I could tell she, for whatever reason, wanted to beat me to the finish, as I tested this theory by speeding up slightly to hear her do so in response, with a heavy breath cadence.

The last mile turns through the gravel parking lot at the front of the park, then continues on to weave through the historic farm area of the park (cue the horse smells), and ending at Rock Ledge Ranch  on the south end of the park. This last mile is as close to flat as the course got. I was under a mile to go, and I could feel I had still had some gas in the tank. So, I sped up. That last mile ended up being the fastest of my race by nearly a minute, and I'm pretty sure my hanger-on only kept up for about 100 yards or so as I began my gradual acceleration. Reel me in? I don't think so. 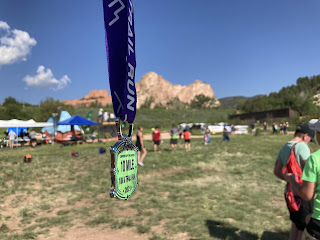 I had a good stride going, and with a half mile left, I could feel some of the treadmill decreasing interval training I had been doing kick in, so I went with it. I kept notching up my speed until I was confident I knew where the finish was, but by the time I saw it coming up, I didn't have enough time to really pull out all the stops, and ended the race feeling like I had more to give and wasn't sucking wind. 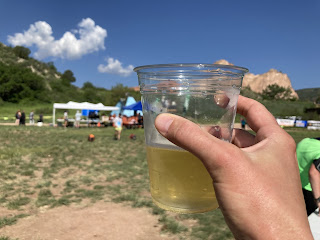 I got my medal, found some members of the Incline Club I run with who had done the 10K, chatted for a while, and then got my post-race food and drink. I'm not normally a post-race beer drinker, nor a 9am beer drinker generally, but today was an exception, as it went well with the 9am pizza and Cheez-its they gave us. 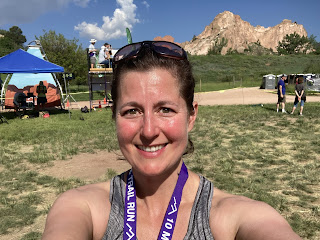 I ended up finishing in the top third of women in my age group, and while I'm not setting any course records, I'm happy with the effort. Next up, Barr Trail Mountain Race in July... this time, with no pre-race cheese.