Confession: My Christmas tree was up until the middle of January.

It was sill alive and drinking water every day, which is good since it was cut down less than a month ago. I am going to confess: I loved that tree. It was my absolute favorite of all the trees we have had at least since we moved to Colorado. And I think it liked being in our living room. As well it should have- it was in a room that for the first time in a long time, is decidedly, NOT SOUTHWEST.

As I mentioned in our Christmas cards, which didn't get out until after Christmas because that's the kind of year we had, we took the plunge and painted this year. If you've been to our house, you know that our living room is open through the second floor, with a sloping ceiling that follows the roof line. We also have two skylights, with shafts ascending through the ceiling to the roof. Hold tight, this information will be important.


We started this adventure by deciding that we really needed new carpet upstairs. To the best of our knowledge, the carpet was original to the house, as it reminded me of carpet my friend
Amy had in her bedroom when we were teenagers... circa 1995. Clearly, it had done its duty. However, we still had the southwest paint color going, so we knew we needed to paint before we carpeted. Starting in February, I took a day off work, took down the weird and broken crown moulding, and trying to be environmentally friendly, bought a couple of cans of recycled paint in a pretty grey from the ReStore... to which I quickly learned may be economical and more friendly (supposedly?) to the environment, but not to our health and safety.

In the middle of a snowstorm, I had the bedroom window open trying to fumigate the place from the extraordinary amount of fumes emanating from this paint. It was seriously 6 weeks before the smell went away. It also turns out that recycled paint splatters all over the place when trying to roll it on the walls, leaving the painter covered and Jackson Pollack-esque marks everywhere. While we like the color, we made the executive decision NOT to do that again.

We moved on to Eric's office, which involved moving a lot of books and office supplies to get done, since this is in fact where he works 40 hours a week. Since its an active office, we needed to crank that out over a weekend... including replacing the baseboards and door surrounds, which were original, banged up and had to be pried off anyway to paint and were therefore shot. The challenge here is that Eric's office has French doors and two closets, a small one that I use for our home office "stuff" and a more regular size one with bi-fold doors that Eric uses for work. I'm not sure what Bruno was thinking when he put in two closets, but while this room is technically designated a "bedroom" in listings, this was clearly designed for office work. While this also meant painting inside two closets and some tricky woodwork, its super nice to have a designed-for office space. Bruno may drive us nuts sometimes with his decisions, but this one was a good plan. Thanks Bruno.

From here, the upstairs hallway connects into the living room, and, like the living room, the hallway ceiling was painted the same southwest shade of Silly Putty, matching the walls. I am 100% certain that when Anita had the house painted in her style from Bruno's French style, she brought in painters who used a spray gun to quickly cover everything at once and call it good.

Did we have the strength to start tackling ceilings. Once stated, there's no going back.

Actually, that timeline can't be right because we had gone to Home Depot, found two colors of paint we liked, and tested the paint on several areas of the walls in the house in order to decide what color to go with. Eric wanted something that was a very dark grey, and I wanted a lighter shade as I was afraid the house would look like the Bat Cave. If you are married, you know what's coming. We went with the lighter shade. Happy wife, happy life. 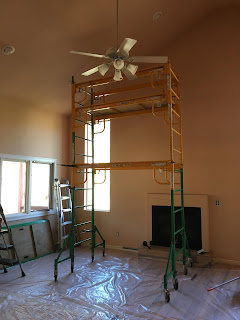 So maybe we did the hallway before the office. Either way, the sentiment was the same, and it was with a fair amount of trepidation that we started in on the hall walls and ceiling. We got to the landing that overlooks the living room and had that decision to make. We took the plunge, and painted all the ceiling we could reach. We held off on the baseboards until the carpet was installed.

We then painted the downstairs hallway, ceiling included, because that was easier to reach, and fast to do... except that even though its a small space, it has 5 doorways that lead into the master bedroom, half bath, garage, closet and basement, which meant Eric spent a lot of time in the garage with a myriad of saws to complete the baseboards and door surrounds. 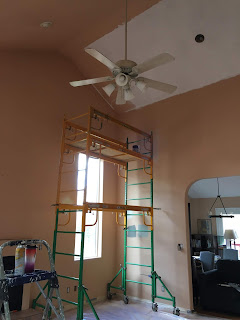 There was then nothing left to do, but suck it up... and order scaffolding. While Eric made arrangements with a rental company, I taped down plastic sheeting over our hardwood floors, the furniture having been stacked in the dining room. We set up the scaffolding, bought a five gallon bucket of paint for the walls, flat white for the ceiling, and went to work. 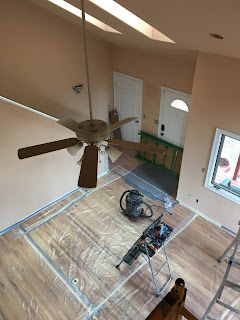 Where I promptly lost my d@%n mind. After two coats of premium "paint and primer in one," the freaking ceiling was still streaky and silly putty showed through. I was wheeling myself all over the living room and contorting myself to reach all the inconvenient parts of this sloped ceiling, and seriously considered jumping off the scaffolding when it became clear that I would need to apply a third coat... What saved me was the knowledge that I wouldn't kill myself, just probably break something and wreck my chances at running the New York Marathon. I swore and threw stuff and cried instead. Yep, I am exactly that immature (and also, there was also a lot of other drama going on outside of the house painting at the same time, so I was basically a time bomb to begin with.) I hated life, hated that scaffolding, hated the house and Googled running away to Idaho.

Once the hell that was the ceiling was done, we replaced the old fish eye can lights with LEDs that will allow us to change the bulbs with one of those extender arms and not have to rent construction equipment in the future, and replaced the powered coated ceiling fan with a sleeker model, it was on to the walls. Two coats of paint, and hours with a tiny paintbrush along the seam where the walls meets the ceiling, a repainting of the banister, and a whole BUNCH of baseboards later... it was time to replace the fireplace mantle (you thought this was done? Nope. This reno went on FOREVER). We found a wood recycler in Denver who crafted us a mantle out of reclaimed wood, and Eric's ingenuity meant he figured out a way to mount the 6x6 beam over the fireplace safely. 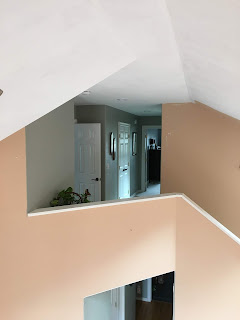 On to the dining room, and the insides of the closets with much less drama. It was finally complete*.

And then the carpet got replaced so we moved all the furniture upstairs again, finished the baseboards and probably drank heavily. I'm not sure, I blocked out some of this.

*Except for the fireplace hearth, which we ignored until Christmas because it took that long to get the bad reno ju-ju out of the house so we wouldn't end up in divorce court. Over Christmas, Eric ripped out the pink tile, and replaced it with neutral grey stackstone and tile top. It looks great.

In the end, we recovered. Someone really should buy Eric a drink for putting up with my crazy, but I promise you, this still won't be our last house project. At some point we have to replace the deck boards outside. There is also the upstairs bathroom, the master bedroom closet, the kitchen and the master bath to renovate... stories for another day and possibly a script for an SSRI.