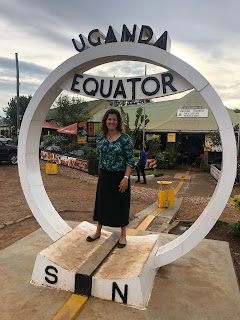 
Off we went to an area of the world incredibly different from anywhere I had been. This partly arid, rural area, 1.5 hours by bush plane from the capitol, was home to what was described to me as a
"semi-nomadic" people. Families lived in stick-built compounds called manyatas, and held on to cultural traditions quite at odds with modernization and development. The difference was so profound, I felt like an anthropologist, observing an entirely different world. Men wore blankets or sheets as garments, and I was told these doubled as sleeping mats at night. The family shelter was thatched roof, with tiny openings to crawl in and lay down on the dirt floor or a calf skin to sleep. There was no tradition of going to school, and children were sent to tend the goat or cow herds from about age seven. Younger children milled around, the youngest shrieking and crying at the site of his very first muzungu (white person) and proceeded to give me the stink eye for the rest of my visit. We visited several manyatas, bending down to enter through a 2 foot high opening in the stick wall, accompanied by the local pastor and local police officer in charge of children's issues. We then went on to talk with community members and church leaders about the community, its strengths and needs. I left knowing there was great opportunity, but knowing that solutions needed to come from the community and a result of a lot of community engagement and a LOT of time- me coming from the outside was going to be just as effective as all the other NGOs who came before... 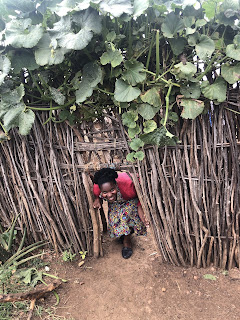 After a long day in our office, the weekend brought another visit to another community. This trip I had arranged, in order to meet a young lady we support. I had done my math wrong- the trip was longer than I anticipated, and we were again out early in the morning for a 4 hour van ride through the country to a hilly, lush and rural area where she lived. Along the way, we crossed the equator from north to south as rain pelted our car.

On arriving to the church, the young lady I came to visit burst out of the doors and gave me a huge hug. It was then I learned that while she writes her letters to Eric and I in English, in practice she speaks very little, and we had to rely on a translator. It was also a bit overwhelming for her, I think, to meet me, and she was quite shy for most of the visit. That said, this visit, like many I have had, was a production in itself. Unlike other visits, this one LITERALLY brought out the band for me. The program had a marching band, complete with homemade uniforms and a lot of heart. I was later told that they were disappointed that they weren't called right before my arrival, as they had wanted to march out to greet me at our van, and escort me onto the church property. However, they went to their plan B, bringing me out to a tent that had been set up, and playing first the American National Anthem, and then several John Phillips Sousa tunes. A bit overwhelming indeed. 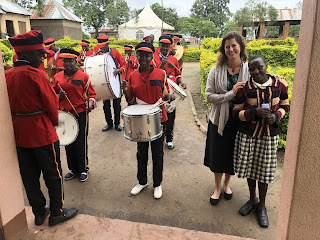 We then went for a home visit, so I could meet the rest of our young lady's family. Her dad had

accompanied her for the day but the rest of the family was at home. We all piled into the van - two staff members from the church, daughter and dad, my trip host, and me, and made our way over to the "good road" for getting to her home. The dirt track quickly had devolved into mud because of the day's rain, and soon, we weren't going any further as the van slid off the side of the road. Out we climbed, and improper footwear not withstanding, we hiked 45 minutes uphill through the mud to get home. It became clear that we would have had to hike a good portion of this anyway, as the road rapidly turned into a rutted path that was only wide enough for walking. 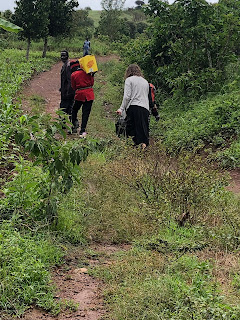 The family greeted me when I arrived, and we visited. Working through a translator and across cultures is awkward at best, but we managed. I met the family - the children and grandchildren living at home, mom and dad, and learned about the older siblings who had left the community to work in the capitol. I heard about how six years ago, the family's home had blown down in a storm, and through funds my organization makes available, were able to build a sturdier home out of brick instead of sticks, with a tin roof to keep out the rain and a stone floor instead of dirt. I heard about the family's farming and the plan they had to expand their land
when they could save the money for it. I then saw the family cow, which had also been purchased through funds my organization had available. The cow was due to give birth in a few months, and there was a plan for the calf and for milk. It was a humble existence, but there was hope for the future.

And dancing. Our young lady and her 2-years-younger niece entertained us with song and dance.

They came alive and their personalities shone through in the dancing. Then it was time for gifts, and we exchanged the food we have brought for the family for a gift mom had woven for me - a basket with Eric and my names on it, and a dozen or so fresh eggs. 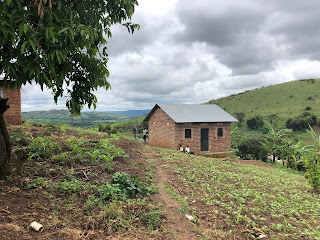 Then it was time to return to the church, and the best course of action was to take the walking path the kids used to get to the church, instead of heading back down the road, to the van that may or may not still be stuck in the mud. I think it must have been about 30 minutes walk or so, slow and slippery downhill, but beautiful in scenery. Jackfruit, banana, and avocado trees grew around and groundnut plants covered the hills. When we got down the hill and to the road that led to the church, surprise! The van was waiting for us, covered in mud but otherwise free to roam. We piled back in and drove the last few minutes back. There was lunch - matoke (smashed unsweet banana) with groundnut (like peanut) sauce, and more band playing. Then a group of girls came out and danced and sang. Our young lady is usually part of this group, but she said she wanted to stay with me and watch. Then it was time for thank yous and more gifts and goodbyes. A fast, busy visit had come to an end, and it was a final opportunity to thank the staff for their obvious hard work and dedication to children, and once last chance to tell our young lady how proud we are of her. Back in the van for the 4 hour ride back, stopping only at the equator for a photo. After heavy traffic in the city and handing off the eggs to our driver, who could take them home, we were done for the day.

The next day was Sunday, and church with my long-time colleagues and friends, and out to our one friend's house in the countryside (again, incredible views of the hills and lush surroundings) for lunch.
The rest of the week was work - good work and hard work, but in the hotel conference room, business as usual. I managed to get a couple of runs in during the evenings, including a final long run: 2.5 hours on the 7th floor treadmill in the open air at about 90% humidity and smoke from the surrounding cooking fires wafting in. That air quality should probably prepare me for NYC!

A midnight flight out of Kampala through Brussels and to Chicago for a wedding, which is the subject of a blogpost to come. 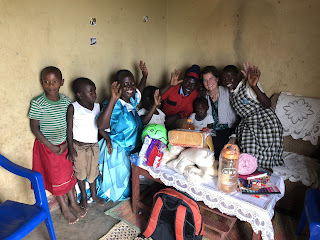 If I'm most honest, I struggle sharing these experiences. While my horizons expand and I want to show people what I've seen, I worry how these communities will be seen. What I hope is that we are reminded that the world is both smaller and much larger and more diverse than we can imagine. I worry that the communities I describe will be received with pity or disgust or the people will not be seen as strong and resourceful and full tradition, but as a project needing fixing. These communities don't need fixed - they need released to fully embrace the resources and the strengths they have. They don't need this muzungu coming in, telling them what to do and how to live their lives. I need to learn about their lives and their traditions, and support individuals in their communities to engage in organic, healthy and respectful ways to challenge those traditions that might be harmful to kids and help develop new ways of expressing their culture that honors the past and protects the people.

This work is hard, and I have the easy job. I fly in and out, see and learn and make a few comments and go. I don't traipse those hills every day to get to my work. I don't have to directly convince families to send their kids to school. Even if I don't always remember what bed I'm in, I'm in a bed and not a mat on the ground. I have clean water and working toilets and so much more to learn about the world.

And I also have another plane to catch... 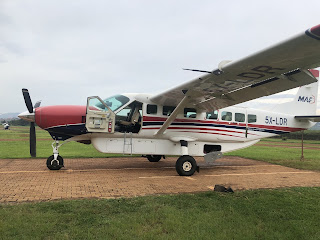