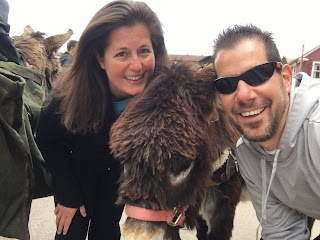 
I have to admit, that, because I'm training for the marathon, this race was not the most important thing of my day, and that ended up working against me. I got up early that morning and did whatever was on my training schedule, so by the time we got to Cripple Creek, my legs had a number of miles on them.

But we put in our money anyway, and sure enough, made the lottery. We were dressed for the occasion this time, unlike most of the other competitors. Eric asked for a "fast" donkey, and we planned out our strategy. The rules had changed a bit this time, allowing one person to stay with the donkey and the other to complete most of the obstacles, coming back to the donkey in time to cross the line together.

We decided Eric should handle the donkey, since he's bigger and frankly, the idea of solo-herding made me nervous.

Maybe not the best decision.

We were out of the gate well, and Eric took off with Jack, our racing ass. I ran for the "pickax," the first thing we had to pick up. Fortunately, the "ax" was a cardboard cutout, so it was an easy scoop and run for me. Into the donkey's pack went the ax.

However, the next stop was picking up two sacks of dirt, which weighed about 20 pounds each. I managed to snatch them, but by then Eric and Jack had found a mutual stride going up hill. I'm not a sprinter on my best day, and with a long run that morning, and 40 extra
pounds in my arms, I wasn't doing much to gain on the lead they already had on me. So I resorted to yelling, which Eric eventually heard, but Jack wasn't so interested in. Eric finally got Jack to slow down so I could dump the sacks into his carry-bags, but this put us behind (and made me feel like I might puke). We were really heading uphill at this point, and while Eric and Jack slowed so Jack could complete an obstacle course, I tried to tuck my lungs back into my body.

Back on up the hill we went, and we were surrounded by competitors. At one point, I looked over at Jack and wondered if I could jump on and ride him.

Last stop was trading the sacks of dirt for a "bar of gold" (painted brick), and we had managed to get ourselves into second place. The people in front of us were about 15 years younger, and he was wearing running shoes... but she was wearing knee-high grey fashion boots. We could overtake them, right?

We pushed. They pushed.

I saw the old museum ahead, and tried pulling out the stops to the finish... 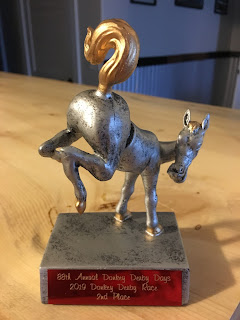 But it was too late. The race ended before the museum. We crossed the imaginary line in second place.

And we didn't even have a snack for poor Jack.

But we did get the "bubble butt" trophy for second, and that's not bad.