This post has been a year in the making.

Around the time of the 2017 Superbowl, we bought a fridge for the basement. That was the beginning of the basement makeover, moving it from Anita's favorite silly-putty color to something more modern, with a rustic edge.

It took a while to get the whole thing together. We started with the back bar, and, since we also wanted an island, this meant Eric had to tear out carpet in order to put down tile. He did so carefully, and then foolishly I decided that it would look best if we used slate tile. Eric dutifully tiled with slate, and quickly discovered that slate is horrid for floors. The tiles are not even in depth and are flaky. They don't sit evenly and grouting them is akin to attempting to patch metro-Detroit streets.

We then bought cabinets at Buy-and-Build, the discount contractor store open to the public up in Denver. We brought the flat-packed cabinets home, and Eric quickly discovered in assembling them that they both did not come with instructions and possibly not the right hardware. However, he persevered, and then with level in hand, we got the cabinets hung, then added pallet wood for a backsplash. It was on to Ikea for laminate counter tops, which are relatively easy (especially compared to the tiling) to cut and install. After that, it was deciding on the bar top for the island. In the last house we owned, we bought a granite remnant for a bar top, and that worked, but we didn't want exactly the same thing (plus granite weighs a million pounds and I can't lift it.) Since we were going a little more rustic, I thought we might be able to create a bar top out of live-edged wood. We found a local guy who milled planks, and not only but our bar top to size for us out of beetle-kill pine, but gave us detailed instructions on how to seal it, AND offered to let us come back and use this shop and tools. Eric sanded and polyurethaned the bar top to perfection, and on it went. We had taken down the dangerously low (read:decapitation level) ceiling fan, and replaced it with lighting that fit our theme and our commitment to not gouging our eyes out, a bit better.

We then needed to paint, and decided that we wanted to create a tin wainscot topped with pallet wood chair rail. That was an undertaking, as it took quite a while to find the corrugated tin that we could actually cut. We finally found roofing material we could use, and Eric painstakingly made the panels, then adhered them to the walls. While I was off on some trip somewhere, he stained the chair rail and got that up.

That was it for a while, as we had a summer intern staying with us and so renovations to the basement had to be put on hold while someone actually lived down there. However, she was gone one weekend, and we pulled out the stops and got the hallway not only painted, but the baseboards and door surrounds replaced. When Bruno finished the basement, he used ends from other jobs, and the wood didn't match consistently, so it was time for that update as well. Unfortunately, the basement hallway isn't straight, so Eric had to play puzzle master fitting all the angled baseboards together. I stayed on paint duty, and even got the built in shelving painted to a clean, flat white from the yellowy-pine it had been.

We waited then until after Christmas and Eric's birthday (where I got our friend Steve to make the Colorado sign now hanging on the wall) to finish off the final bits and pieces of the basement. Bruno had originally included a small wet bar between the kitchen-area of the basement and the rec room. It was nice that it was there, but with a tile counter top, raised bar top and back splash, and blond cabinets, it no longer matched.

Let the destruction begin, along with quite a bit of yelling, as that tile counter top was double-screwed into the 2x4 frame, then duly sealed with the same grout I believe they use to keep masonry on Notre Dame. It was something to get it off. We replaced the lower counter top with matching Ikea laminate, but for the top bar... we decided that we needed to match bar for bar as well, so we were off to find another piece of live-edge beetle kill pine. This piece needed to be much wider however, and we knew our last supplier wouldn't have any in the width we were looking for. Fortunately, Eric's intrepid internet skills led us to a random guy in literally the middle of nowhere west of Wilkerson pass, who had a field filled with beetle kill trees and a machine to make planks. We searched and found what we thought we wanted, and, since they were long enough, made a snap decision to also buy a length that would accommodate creating a vanity for the basement bathroom as well... because why do one project when you can do them all?

Getting the custom bar to fit around the existing walls and into the bar frame was an exercise, literally. We carried the bar top up and down the stairs about 30 times, each time cutting a tiny bit more around the wall notches each time, until it finally fit snugly but flat to the base. Eric finished the backsplash with more pallet wood, we touched up the paint, and then Eric stained the lower cabinets to be a closer match to the new cabinets. We tried our best to find a dish washer that would fit in that space next to the sink, but it was a lost cause, so the cabinet and the tiny refrigerator with the wood panel front, are staying.

Since we had the vanity top, it was on to the bathroom. The basement bath sported two tiny vanity/cabinet combos, with a weird open space in between, where Anita had placed a small table, but we just had garbage can. We had already replaced the toilet, but we looked at the beige tile with the one inch stained grout lines, pulled out the toilet and went to work grinding out and replacing the tile. This time we were a little smarter and got the "slate look" tile but not actual slate. Our guests will thank us when they don't stub their toes on the floor getting out of the shower.

Tile and grout went down, and then we replaced the baseboards and door trim to match the hall. While we were still at the bare floor stage, we painted the walls and ceiling, because if you don't have to put down drop cloths, so much the better.

Our friends Doug and Pam came to visit, and while here, helped us narrow down our sink choices and watched us hit the "Buy" button on two Amazon specials: copper vessel sinks in a bucket style and matching tall faucets. Eric's one requirement was that the faucets had to use just a single hole, so we didn't have to drill more hole than absolutely necessary into the vanity top.

I had a minor melt down trying to find a mirror that would cover the large holes left behind by not quite centered medicine cabinets, but eventually took advantage of a Kirkland's sale and got a mirror that was at a price point that didn't make us want to vomit into the toilet, which was good because at that point it was still sitting in the bathtub. An easier task was finding lighting, which we ordered via Amazon after looking through approximately 7,000 options on line.

Eric had a minor meltdown reinstalling the toilet, as when he picked it up out of the bathtub, the tank lid slid off and shattered all over the new tile floor. It turns out that when you buy dual-flush toilets with the buttons on the lid, replacing said lid is more complicated than you would imagine.

It was on to sanding and polyurethaning... again. And again. And again. There was a strange pitting in the face of the vanity, requiring multiple iterations of sanding. Eric then sprayed the first coat of poly, and soon after, I got home from work and, not thinking, opened the garage door, exposing the wet poly to the blowing wind. This necessitated a resand and start-over. Seven coats of poly later, and it was finally complete. 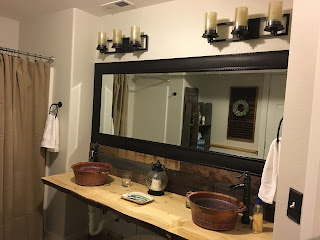 Install mirror, install sinks and faucets, find towel rings and baskets to go under the sink. Add backsplash. In the Willowstone Market Antique Mall/Garage Sale/Flea Market, we found a stall going out of business that significantly discounted a shelf that was just the right size to fill in the overly large and awkward gap between wall and toilet.  Add a new shower curtain, and we were done.

Phew. That was a long year, but the basement is done... well, except for the need to paint the basement bedrooms and the stairwell. Anybody got a spare brush?