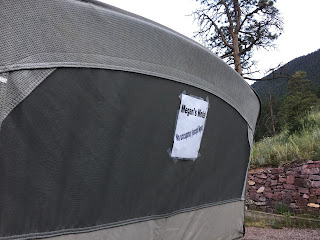 Remember when we were kids and could sleep anywhere? I mean, it really didn't matter, when we were tired, we slept. When I was in college, I got tired and laid on the floor of our dorm, my legs in a pile of shoes, and fell asleep.

Lately, I've only had a passing acquaintance with sleep. It's not for a lack of being tired. I am freaking EXHAUSTED, people. I'm training for the Pikes Peak Marathon, which means I'm running up and down mountains on a regular basis. I'm in charge of a major project at work, which means I'm cranking out the hours. We are also hosting back to back to back guests, so my off-work hours are filled with fun touristy and tourist-entertaining stuff, which I totally love, and the people who are visiting are great. But sleep? Yea. Not so much. It takes me more than an hour to fall asleep and then trying to stay asleep is like competing in an Olympic sport, except not so fun or profitable, and definitely no medal at the end of the 8-hour event.

This has been going on for quite some time.

Eric finally tried to fix it for me. He's a hero, or at least has hero-traits.

Eric knows that I sleep better in our pop-up camper than anywhere else. Something about the three inch foam mattress topper and the fresh air, and I love it. This week, we also had 9 extra people who don't always live here staying in every nook and cranny in the house (for the record, 7 Z Family members, 1 summer intern, 1 cadet), so it was kind of hot indoors.

So he popped up the camper in the driveway, and labeled it "Megan's Motel." He knows that much longer of this no sleep thing, and I'm going to be chewing on the curtains and someone is going to shoot me full of Ativan in a rubber room.

It still took me an hour plus to fall asleep. But it was quiet, cool, and that mattress was inviting. I may have actually started sleeping.

Holy crap, what was that.

Lying there in the dark, under my sleeping bag, I was fully awake, wondering if the camper had lost a piece.

As if it were that simple.

At this point, I have two opposing thoughts, which were both equally true.
1) It's fine. I am going to be ok.
2) The bear outside is going to tear through this camper in a second because he can smell me sweating through my sleeping bag.

It was most certainly a bear.

I waited in total silence and stillness as the bear sniffed around the camper, drawing up close to the bump-out where I was lying like a raw steak... and in the process, setting off the motion sensor attached to the front porch that kicks on the light. This startled the bear, who in turn lumbered loudly up the driveway and presumably, down the street.

I laid there in silence, like a statue, for a good five minutes more. When I was mostly convinced he had gone, I unzipped exactly 4 inches of the window and sneaked a look out. No bear.

I grabbed the garage door opener I brought with me, hit the button, snatched my phone and scampered inside, closing the garage behind my fleeing, robe covered read end.

The rest of the night was a waste.

Tonight, I might just have Eric smack me upside the head with a cast iron skillet. It would still do less damage than a bear could.