I ran up a mountain.

I RAN UP A FREAKING MOUNTAIN!!!

Like all the way to the top. From the bottom.

Ok, deep breath, get it together.

I wasn't the fastest. In fact, I'm pretty sure the woman who won the race was off the top, home, showered, and napped by the time I finished. I. Don't. Care.

The race started in Happy Hippyville at Memorial Park. Eric came to the start with me and patiently waited while I stretched, peed (many times) and got ready. I was in wave 16 of eh, 20 at least, waves. I'm not fast. I know that, and I'm ok with that. I race myself, because everyone else beats me.

For this race, I started 16 minutes after wave 1. That isn't always the case for many races, but this race is limited to 100-ish runners per wave. For the first mile (or more... I am really really sure that their mile marks are less-than-rough estimates and this race is quite a bit longer than the advertised 13.35 miles) the run went through town, then took a turn toward the Incline, running up Ruxton Avenue toward the mountain. Pass the Incline, over the mat for the one-mile mark, and I hit trail, which felt good since I'd been running on pavement in my trail shoes. I'd done a lot of reading and took a lot of advice from a number of people, and went out slower than I would have normally. Many people go out way too fast and then tank when they hit the real uphill.

Up I went. This race is a combination of running and power hiking, and with all of the other runners, I ended up hiking more in the first three miles than I expected to do. I had been up Barr Trail one time before, and ran the first four miles. However, race day was slower.  After the first three or four miles, I got more running in, and the closer I got to Barr Camp at 7.5 miles, the more the runners around me and I chatted. It's a relatively small race and single track, and so you are around the same folks quite a bit. So you talk, and encourage each other. It was fun.

The weather was much more humid than I had planned. Colorado has very low humidity, but the night before the race, it poured like crazy over the mountain (and our house), and it was unusually humid at the start of the race. This meant I sweat like crazy early, more than usual, even though the temperature wasn't extreme. To accommodate, I started taking Gatorade at every aid station (which is sometimes a risk because Gatorade doesn't always work well with my stomach during races), and started in with ShotBlox earlier. The combination seemed to work.

I also started taking ibuprofen and aspirin in alternate dosages. This kept back pain (from leaning forward uphill, and carrying a hydration belt around my waist) at bay mostly effectively, and helped psychologically (seriously, it's a thing. I have the ability to psych myself out. I almost did the night before because, let's face it, I am a nutbag.)

7.5 miles in, I hit Barr Camp, which is a bunk house for hikers. It's a good aid station, armed with a large coterie of enthusiastic volunteers. I paused here, had some water and Gatorade, and ate some of the walnuts and almonds I brought with me. In retrospect, I could have shaved off time by not stopping and eating while running, but at the moment, I thought this was best.

Onward and upward. After Barr Camp, we continued through the forest, uphill, where the trail narrows. I was caught up in a pretty big clog of runners, which significantly slowed me down because there were very few opportunities to pass.

The A-Frame is the next major location. There were other aid stations, but these are the classic points on the route. I think the A-Frame is a wood shelter built just below tree line, but to be honest, I was concentrating on getting a move on, and there could have been a purple elephant up there and I wouldn't have seen it.

I passed the "4 miles to go" sign, which was a mini-goal I was pushing for. My legs were feeling... something. I've never had leg cramps so what I experienced may have been mild cramps or generalized fatigue, I'm not sure. I told myself that the 4 mile sign would be my reward, and I would treat myself to the sublingual leg cramp medication I had brought with me. At the sign, I was half-way through a ShotBlock, and so waited a bit, then took the meds.

I hit treeline, and the meds and the training kicked in. It was like my body said "oh, I know this," and took off. The last three miles of the race are above treeline (11,500 feet of elevation), and this was where a lot of people tanked and/or cramped up. In fact, I passed a woman who was in the throws of extreme muscle cramps and literally howling. She had someone with her - I would have checked on her otherwise (I'm not heartless!)

But I was feeling good.  And fast. And in control. I told myself, "ok, do what your body can do, and just go until you have to slow down."

I didn't have to slow down.

In what most people think is the toughest section of the race, the part that I had done multiple times in my training, I hit negative splits. I felt invincible. The endorphins kicked in, my legs felt fresh, I felt strategic, and I blew through those miles (relatively speaking. The best race planning for the average runner says to plan for 30 minute miles above treeline, and I did them closer to 20). People were tanking around me, peeling off and leaning over the boulders, laying down on the granite. But I pushed it. I passed as many people as I could, when I could. I got stuck several times behind slower athletes, because unfortunately, I'm just not that aggressive and am loathe to pass when there isn't a wide berth. So, instead, I took the chicken route and followed more aggressive runners when they passed most of the time. 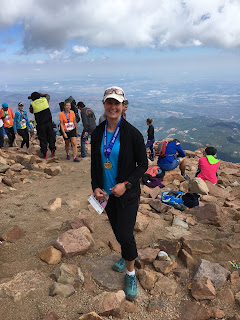 That endorphin rush may have made me a bit high, and combined with the relative hypoxia brought on by the altitude, I may have out of my gourd. At one point I considered getting to the top and turning around and going back down. I texted Eric with a mile to go (because I actually had a signal and made the decision to run and text on a rocky course, which was maybe not the best idea I've ever had) with my favorite quote from the movie Training Day: "King Kong ain't got nothing on me!" I high-fived the search and rescue staff on the side of the course. I think I shouted "best race EVER" to anyone listening. I know I answered someone on the 16 Golden Stairs (32 switchbacks that lead to the Summit) who asked the question "Where's the gold?" with "In your heart, of course!"

Listen, I have never claimed I make any sense when I run. In this particular case, I was high as a kite and enjoying myself immensely. At altitude.

I ran into another log jam at the last two switchbacks and didn't finish as fast as I knew I could. But 5 hours 22, minutes and 59 seconds after I started at the bottom of the mountain, I was at the summit, having passed nearly 300 people in the last three miles of the race.

This is one of the few races where they don't give you the race shirt (or in this case, jacket) until you finish the race.

I got the jacket, after retuning to the park where the race started, and then hanging around to exchange it for a better size (thank you Eric, for your patience in letting me hang out to get a medium instead of large. Who knew the women's sizes would be "real people" sized!)  I wore it today as Eric and I walked around Manitou Springs with our friend Susan, as we saw Susan's husband Tim, who I've trained with a couple times, off for the Marathon (he's a total beast, by the way) and then 8 hours, 46 minutes later, saw him finish. I wore it when we went to the Hungry Bear for breakfast and saw runners I had spent some time chatting with on the course.

I earned that jacket.