Some time in December, 2014, we decided to sell our home. This singular decision ushered in 18 months of unexpected adventures, including selling our house in less than 24 hours, falling into the caretaking business, multiple crazy garage sales, moving between 5.75 homes (the house we sold, the House in the Woods, the House on the Prairie, the House in Town, that house we only kinda moved into, House 6, and our friends' home), dealing with buyers, real estate agents, sellers, repairs of every kind imaginable and then some, poop, animals, some travel thrown in there, frustration, hilarity, and a more or less permanent sense of never really knowing what was coming next.


June 25, that story came to an end. We are happy to report, we (after a little drama and delay) CLOSED on our own home. We are homeowners again, and ready to start our new adventure.


For those of you who have read consistently over the last year, and laughed along with us each time we experienced something crazy as we took care of other people's homes, do not fret. I am confident the stories will not end. In fact, I'd like to introduce you to some new characters.


First, our home itself. Perched above Ute Pass west of Colorado Springs, we literally sit on the side of Pike's Peak. We aren't terribly high up the mountain, but are above anywhere else we've lived. Standing on the street in front of the house, the altimeter reads 7,634 feet. The driveway pitches perilously downward, making the roof of the house about even with the road. The terrain continues downhill behind the house, giving us a walkout basement and a deck that extends across the back of the house. We have mountains all around us.


Next, meet Bruno, the Frenchman who built this house in 1995 and lived here 10 years. Bruno was the builder, but he perhaps should have stuck with being a general contractor instead of taking things into his own hands after the home was initially constructed.


Next, meet Anita, the 70-something, orange-haired good time girl we purchased the house from.


You can expect to hear about them in the coming weeks.


Finally, meet Cascade-Chipita Park. This may be the only place in the world where you can enter either town name on our address and the mail will get to us. This is a former resort community from the late 1800's/early 1900's (resort in the "Up North Michigan" sense of the word, not the "Mexican Riviera" sense of the word), where I believe a number of the homes are still vacation rentals and summer family cabins. There is a community hall one block below us and one block to the west that hosts community pot-luck suppers and the sign says to "bring a covered dish." I'm pretty sure that sign was originally painted in 1954. I believe the community hall also hosts Bridge tournaments.


Welcome to the next chapter: 7600 Adventures. 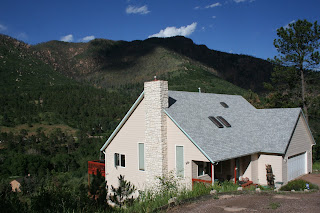 Epilogue to this post: Just after I hit "Publish," I ran outside to bring in the garbage cans before what appeared to be impending rain. I managed to fall down said perilous driveway and have them roll over top of me. Thus it begins. Now excuse me while I go ice my foot and knee...﻿