The Adventures of Flat Stanley in Colorado

Flat Stanley arrived at our house last Friday. It turned out to be a good weekend for a visitor. Here's how Flat Stanley spent his time in Colorado...

Flat Stanley and I were up early and off to the Incline. This was my first time on the Incline this year, and I was a little concerned about the footing, so I attached both traction and Flat Stanley to my Camelback. Part way up, I need to put the traction on and we went a little slower than usual, but we were still up in under an hour. Stanley enjoyed the view of the
city from the top, and was impressed by the views of the mountains and Pikes Peak on the way back down Barr Trail, which, by the way, was definitely snow and ice packed, and traction was required. I explained to Stanley that Pikes Peak is called America's Mountain and its called that because Katherine Lee Bates wrote America the Beautiful after a trip up the mountain.

We came home and got cleaned up, and then Eric, Flat Stanley and I headed into the mountains to the old mining towns of Cripple Creek and Victor, as we had heard that there was an ice sculpture festival in Cripple Creek. On the way, we explained to Flat Stanley that there is a long history of mining in Colorado. The area we were going to was known for gold mining, and in fact, still has an active gold mine today. It was an absolutely beautiful day, and the drive was gorgeous. It was a good thing that Flat Stanley had his sunglasses, as Colorado gets 300 days of sunshine each year, and that day was one of them!

We arrived in Cripple Creek, and saw that the ice sculpture festival was on Main Street (which also happens to be the street Eric and I ran through this summer). We took a look at the ice sculptures. There were some cool (no pun intended) and quite large sculptures, but many fewer than we were expecting. We walked through town and saw the old mining equipment that is still around. In what will come as a surprise to absolutely no one, we went on a hunt for Cripple Creek's donkey population, and in a quick second, had found them. Eric and Flat Stanley fed them cabbage we had brought along "in case" we ran into them. We explained to Flat Stanley that the donkeys are mostly wild, and are a tradition in the town. The town legend is that these donkey are the descendants of donkeys that worked the mines that were just let loose after the mines closed. What we didn't share with them was how terribly the donkeys were treated in the mines, but if you want more information on that, there is a chapter in Harriet Fish Bakus's book Tomboy Bride that does a more than adequate job describing the fate of these animals. (Incidentally, Tomboy Bride is Harriet's story, who was married to a geologist who worked the Tomboy mine, among others, in Colorado and elsewhere, and is a fascinating look at mining life in the late 1800s.)

Because the day was so beautiful, we then took a drive over to Victor to see the active mine. As you might imagine, I have some pretty distinctive feelings about mining and the destruction is causes to the environment, but that doesn't stop the Victor mine from pulling nearly $2 million in gold out of the mountain about every 4 days. It is also a fascinating and absolutely enormous setup.

From there, we took the Gold Belt National Scenic Byway south to Canon City, a route we had never driven before. Flat Stanley got to hear Eric and I yak away in the car and ooh and ahh over the mountain scenery, including a family of big horn sheep on top of a hill that we drove by too fast to snap a photo of. He also heard how different we are: I opened my mouth to say something, when Eric said, "Gosh I love this road. It would be so cool to drive a high performance vehicle through it." I laughed and said "I was literally about to say, Gosh I love this road. I would love to get out and run it!" We all agreed, however, that we definitely need to do that drive again! 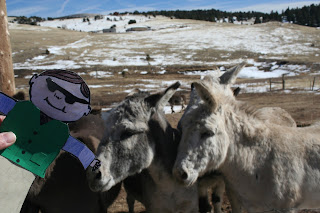 We drove through Canon City and Florrisant, and took a detour to try to see the SuperMax there... but it turns out (not surprisingly) that you can't see it from the road. We headed back to Colorado Springs, where our cadets had already come over the house. We were bummed that they didn't join us for our brief sojourn to the mountains (we originally planned to all go together, but then some of their rules changed... such is military life.) Flat Stanley got to hear a little bit about life at the Air Force Academy, we cooked dinner, and hung out. We were all in bed pretty early. 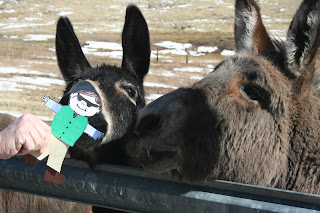 We checked out a new church on Sunday, then came home to a Valentine's breakfast of "Uncle Joe's" chocolate chip pancakes, sausage (well, not for ALL of us), eggs, toast, and whatever else wasn't nailed down! We spent the afternoon at home, then all went out to see a movie, take advantage of Qdoba's 2 for 1 burritos (and the kind cashier didn't even make Joseph and Logan kiss to get the discount!), and then head separate ways. I'm pretty sure Flat Stanley was in awe of how nice, polite, and helpful those cadets are!

The rest of the week wasn't quite as exciting for Flat Stanley. He came to work with me each day, but the big highlight was that one of my wonderful co-workers from Kenya came to town and surprised me with coffee. I bored Flat Stanley with all the ways I love coffee and how my organization works in places were some of the best coffee is grown, and how as a consequence, I have become quite the coffee snob. I'm pretty sure he was just like "put on a pot already!"

Now, it is time for Flat Stanley to head back to Michigan. Hannah's son will get a version of this blog in the mail along with Stanley, which will go to his elementary school. This ends this chapter of the Adventures of Flat Stanley. If your child has an assignment like this, feel free to call us. I think we can manage to keep your child's Flat Stanley entertained. 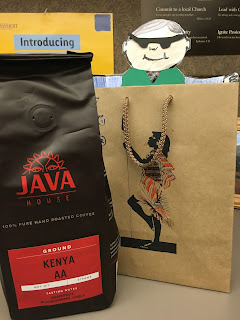