Say Nothing at All

In my last post, I talked about the Z Family visit to Colorado. There was one thing I didn't mention in that post. The entire week, there was a epic battle happening between the Zolman's and the Kelly's, a stand-off really, where nothing ever actually said out loud.

It was the battle of Kinky Friedman.

Backstories (hang on, because there's a lot.)

Backstory 1: Kinky Friedman is a man who ran for governor of Texas in 2006. He lost, badly. Turns out, he has a much larger backstory as well, but I didn't know any of it until I looked him up a Wikipedia just now.

Backstory 2: There was a company that made 14 inch action-figure-like dolls of political figures, including Hilary Clinton, Barak Obama, and Kinky Friedman. The Clinton and Obama dolls sold well. Kinky did not. A company called Woot got a hold of a bunch of these dolls. Woot is the original "deal of the day" website, where they sell one item a day at a significant discount. Occassionally, they would have something they called a Woot-off, where they would sell one item at a time until it sold out and then replaced it with another item. It had a cult following, or at least it did until they were bought by Amazon and became infinitely less cool. We, and a number of our friends, were a part of the cult (ok, well, we paid attention, so I guess that counts.) I used to send out emails with sarcastic stories in them to announce the start of a Woot-off. I don't do that anymore.

Backstory 3: Woot-offs would sometimes include a "Bag of Crap," which was a mystery box of items that you could buy for $3, plus $5 shipping. Sometimes they had things like DVD players, LCD televisions, or KitchenAid stand mixers in them, along with other various items. More frequently, they did not but you never knew until they showed up at your house. These also had quite a cult following and were very hard to get - they would sell out in seconds. Eric was good in the early days of Woot of getting them, and we ended up with a variety of crap including pregnancy tests, gold colored over-the-ear headphones, a sandwich cutter, wireless home telephone systems, and once, a Kinky Friedman doll.

Backstory 4 (told you this would be long): We used, and still, host a "Christmas Vacation party" each holiday in which guests dress up as characters from the National Lampoon's Christmas Vacation movie, we have a dinner that resembles the Christmas Eve dinner from the movie, and then we screen this holiday classic. Somewhere in there, we also play Christmas Vacation trivia, and the winners get crappy prizes. Our friends the Koteskey's would come to our party every year, and, in fact, took over hosting the party in Fort Wayne after we moved to Colorado. They would win prizes, and would invariably hide them in our house so they didn't have to take them home. One year, one of them won Kinky Friedman and stuffed him in the couch cushions before they left.

Backstory 5 (and the last one): When we moved to Colorado, the first Christmas we sent the Koteskey's a box of Christmas presents that included a box of Cap'n Crunch, several other items, and Kinky Friedman. Kinky contained instructions that should they ever try to return him to us, he could never show up the way he had arrived to them (in a Christmas present.) The ongoing Kinky exchange had begun. For the last three years, Kinky has been shuffled between Colorado and Indiana. He showed up in our refrigerator after Keith came for a "chase-cation." He was dropped off as house-warming present at the Koteskey's. We once pulled over on the side of the road, convinced the Koteskey's had duct-taped him to the engine block of our rental car (they hadn't.) I left him behind the white board of the board room of the church Keith pastored. Kinky ended up in my running gear after Dances with Dirt, where he sat for almost a year because I left from Dances with Dirt to Thailand last year and left my running bag at my parents' house. I actually had my parents send Kinky to a friend of ours in Fort Wayne to present to Keith during his 10-year anniversary celebration at the church... which is where he was when Zolman's (who live in the same neighborhood as the Koteskey's and work at the same school) came to visit.

Anyway, the Z's came out, and Eric somehow figured out that the Koteskey's had given the Zolman's Kinky to leave in our house. Well, game ON. Eric snooped in the guest bedroom and found Kinky on day two of their vacation, in a bag I had filled with hangers in the closet. He stole him, in order to sneak Kinky back into the Zolman's stuff and trick them into taking Kinky back to Indiana.

One of the Zolman's (turned out to be Emma! Traitor! Maybe she can't live with us.)  snuck into our room and stole him back,

They wrapped Kinky in a plastic bag and left him on our porch the morning we left for Estes Park, stuffed behind a potted plant so we wouldn't see him. Unfortunately for them, I went running that morning, found the bag, thought it was junk left by the workers, and brought it into the garage. Eric found the bag, realized it was Kinky, and stuffed him in the map compartment of HailNo.

The Zolman's stole him back within hours.

We figured they would hang on to him until just before they left, since we were parting ways in the mountains at the end of the weekend. We kept ourselves alert, and never left our car unlocked. We minimized any chance they had at sticking Kinky into our stuff, and secretly checked the car each night since we had Z-kids in the backseats.

We never mentioned a thing. Neither did the Zolman's.

On the last day, we figured that since we didn't have him back yet, the Zolman's end game was to stuff Kinky in the sleeping bag we had lent them for Zach to sleep in. We were right, and as soon as the Zolman's gave us the bag back, Eric tore through it and found Kinky. Unfortunately, he didn't re-roll the sleeping bag, and the Zolman's knew we knew as soon as they saw the mussed bag in the backseat of HailNo. They began patrolling their car, and, even though we had parked just feet from the condo, locked it as soon as they walked away from it, even though they were actively loading it with the stuff of 7 people.

But we had it.

As we said our goodbyes, we could tell the Zolman's were wondering. We got in our car. They got in theirs. The Zolman's drove out. We lagged behind, and watched them drive through the condo complex. We called them.

"Christine? Hey Chris! Listen, you might want to check. It looks like you have something caught in the grill of your car. It might be a bird! You don't want to drive down the highway like that! You better stop!"

We watched from a distance as the van pulled to the side of the road, and Chris got out of the car to check the grill. From 200 yards away, we watched Kinky go flying into a field as Chris threw him, yelling something we couldn't hear from our vantage. We drove off in the other direction.

Several hours later, we got this texted to us: 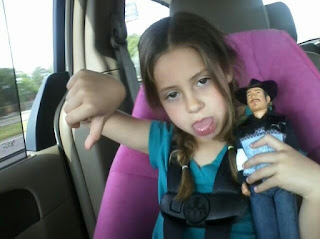